Dragon boating is one of the oldest sports in the world dating back 2000 years to Southern China.  Originally held to commemorate the life and death of Qu Yuan (Chinese minister & poet) dragon boating has spread around the world from Canada and America, to countries all over Europe, South Africa, New Zealand and here in Australia.
Dragon boats were traditionally made in Southern China out of teak wood to various designs and sizes. It is one of a family of traditional paddled long boats found throughout Asia, Africa, the Pacific islands and also Puerto Rico. Currently, boats are being made for competitive purposes out of carbon fiber and other lightweight materials. For competition events, dragon boats are generally rigged with decorative Chinese dragon heads and tails. During training these are removed.
The use of dragon boats for racing are believed by scholars, sinologists, and anthropologists to have originated in southern central China more than 2500 years ago.
DRAGONBOATING IN AUSTRALIA
Dragon boating began in Australia over 25 years ago when the Western Australian Surf Life Saving Association was invited to the Penang Festival.  Since then,State Dragon Boat Associations and a number of clubs have been formed around Australia.  In Queensland 34 clubs represent more than 1500 members.  Regular regattas are held around the south east with crews of mixed, women’s and men’s teams competing in Junior, Premier and Masters categories.
Races are held over distances ranging from 200m to 2000m with four to eight boats in each race.  The end of each season culminates at the Queensland State Titles where clubs from around Queensland compete. Clubs can also choose to compete at the Australian National Titles held annually in a different state each year.
Corporate events are also held giving small and large organisations the chance to bond and work as a team while experiencing all the spectacle and colour of a dragon boat regatta.
DRAGON BOATING AROUND THE WORLD
Dragon boating around the world is in many racing formats and there are a wide range of dragon boats. Boats range from small boats just holding 5 to 10 people to dragon boats that seat more than 100 people in the boat.
Believe it or not, 100 seater plus Dragon boat races commonly called ‘Snake’ racing is a traditional popular annual event in India.
Dragon boat racing in Asia is packaged up with a lot of festivity and excitement.

WHAT IS A DRAGON BOAT?
A Dragon boat is a long paddling boat approximately 12 metres long. Each dragon boat holds twenty paddlers seated in pairs, one drummer at the front who keeps time and one sweep at the back who keeps the boat on course. 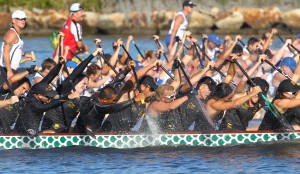 Below is a few links to races around the world